Although they have identified processed steel products dating from 3000 BC not known for sure the exact date of the first steel. However, it is considered that the first quality steels with sufficient got them Sir Henry Bessemer in 1856.

He succeeded through a process designed himself. This system consisted of blowing pressurized air into the bottom of a cast iron spoon where streamed. Air oxygen reacted with the silicon, then the carbon, phosphorus below, which are impurities in the iron foundry. The reaction of oxygen and silicon is highly exothermic, making the metal melting continued without spending more fuel. The air is injected under pressure from the bottom of the container having the form of an open bucket, and stops at a red flame arises, which indicates the oxidation of iron.

This system had a major impact on the industrial revolution, as it was possible to manufacture a very cheap material with properties that allow us to make better and more bridges, railways, buildings, ships …

Later, in 1857, Sir William Siemens consigió decarburize alloy steel with the help of iron oxide. In 1865 already they did, but in very limited quantities, steels with 25% and 35% nickel, which resisted better the action of moisture in the air, however is very small-scale producers.

From then until 1900 chrome alloys are studied, which improved the corrosion resistance of steel. Later numerous studies on chromium alloyed steels and nickel were performed, that’s when you can say that stainless steel we know today appears.

Thus, the stainless steel is not a simple metal but an alloy whose main material is iron, to which is added a small proportion of carbon. So strong and resistant to external agents which may deteriorate material is achieved.

Today stainless steel has many applications and surrounds us in virtually all areas of our lives, in our homes, in the form of cutlery, sinks, pans, ovens … In our cities, as varandillas protection, as part of cars, bus stops holding or being the strong skeleton of elevators and other structures that require a long shelf life.

Also it has a strong presence in industry, being a very important part of the equipment of pharmaceutical companies, petrochemical, fluid treatment plants and holding tanks, among many others. 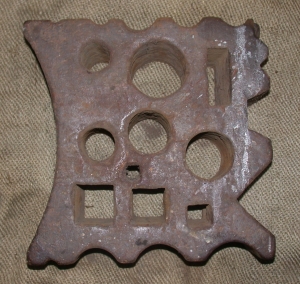